The name 'Skylark' was long associated with the stage services that ran from Woodfalls, Redlynch and Downton into Salisbury from the south. The original propriertors were Frank Shergold and Sons (the Shergold name is of course also associated with Silver Star of Porton, but there was no family connection). The Shergolds were carriers between Woodfalls and Salisbury before the 1914-1918 war and during the 1920s they were coal merchants as well.  In September 1926, the motor bus service started with a Reo chassised bus with Pitt of Amesbury body, running initially on Tuesday and Saturday. From 1920, Edward Locke of Landford was operating a motor bus from his home village to Salisbury on Tuesday and Saturday, running via Woodfalls and Downton; he also owned a charabanc which was called Skylark. There was other competition at this time too from Cox of Landford, Newman of Redlynch and Jack Connolly of Woodfalls which started back at Hale, the latter business passing to Wilts & Dorset in July 1933 (who had themselves started on the Woodfalls route in August 1926). After 1931 and the introduction of road service licencing the Salisbury route was served by Skylark and Wilts & Dorset.

A Skylark timetable from October 1930 shows six journeys each way on Tuesday, Thursday and Saturday, with an extra late cinema bus from Salisbury on Saturday evening. On Sunday, there were four each way. Wilts & Dorset service 15 was offering eleven journeys over the route each weekday (eight on Sunday), plus late cinema bus on Wednesday and Saturday. Also listed by Skylark is one return journey on Friday only from Downton and Woodfalls via Landford and Plaitford to Southampton. But Gilbert Haines of Downton - and landlord of the Kings Arms - was also running a similar route twice a day (three times on Sundays) from Downton via Woodfalls and West Wellow and Ower to Southampton. His route passed to Wilts & Dorset in January 1932.

Frank Shergold left the bus business he founded and from February 1934 until June 1936 the Skylark business wsa run by Wilf and Ralph Shergold and Horace Barber and then from 1936 until 1947 it was Barber alone - Barber had started with the firm as a driver and became manager in 1936. By that year, Skylark had expanded to a daily operation and added a short shuttle run of two minutes duration on Tuesday and Saturday to link the village of Hale to the main Salisbury route at Woodfalls. A Thursday market service had also been introduced from Woodfalls via Fritham and the strangely named Nomansland to Romsey.

The second world war brought increased business. After the war, the main route was extended eastwards across the northern New Forest through Fritham and Nomansland to reach Stoney Cross Aerodrome.  Double-deckers arrived for the first time. In December 1946, a service of up to eight journeys a day was proposed from Downton to Ringwood, via Woodgreen, Fordingbridge, Gorley and Mockbeggar. This was not pursued, probably because of objections from Hants & Dorset Motor Services. The firm evolved and became a limited company in January 1947.  There were fifteen buses and coaches adn the company officials of Skylark Motor Services Ltd were listed as Sydney Moody, Horace Barber, Alfred Pullen and Mel Moody. The Moody family developed a travel agency which was based in Milford Street in Salisbury. Wilf Shergold had rejoined Skylark business after the war and was listed as Chief Engineer in 1955/56 and continued for years subsequently.

In 1946, Skylark bus operations were substantially expanded away from their traditional operating area when the business of F & R Viney of Chilmark was taken over together with their daily route from Salisbury to Burcombe, Barford, Dinton, Tefford and Chilmark. On Tuesday and Saturday, it reached Ridge, south west of Chilmark. (Fred and Reg Viney, the two partners, were brothers who had both lost limbs in a stone fall at Chilmark Quarry. Their route was running on Tuesday, Thursday, Friday and Saturday by 1923, increased to every day from 1932; the Ridge extension started in 1934.)

The double deckers: the first into the Skylark fleet was OW4257, withdrawn from the Southampton Corporation fleet in 1945. This Thornycroft had been new to Southampton in 1934 as their fleet number 11. Its Park Royal body seated H25/24R.  It arrived in August 1947 and served until the end of the bus operations in 1951. In Skylark days, it had an AEC engine and radiator and was first painted in two tone blue and cream. Later it was repainted in Hull style blue, but without the streamlining.

1947 also saw the first double-decker come into the fleet, a second hand Thornycroft from Southampton. For a brief period from September 1949 until October 1950 the main Salisbury - Woodfalls - Stoney Cross route was extended to Lyndhurst. But, as told above, the routes were never entirely the province of Skylark, and there was always strong competition with Wilts & Dorset (especially between Salisbury, Downton and Woodfalls) who were to buy the bus operations from Skylark on 17th June 1951. It is reputed they paid £2,000 for the goodwill of the Woodfalls and Chilmark routes. These were integrated into their existing operations.  Until comparatively recently several W & D vehicles were out-stationed at Downton to operate the Woodfalls route (Skylark continued for another 13 years as coach operators from their Woodfalls base). In 1950, they had expanded to the market town of Lymington in Hampshire, with an associated company Skylark Motor Services (Lymington) Ltd buying the long established business of Edgar Morton on his retirement. This was sold in 1955 to the Maitland family , owners of the well-known Excelsior European Motorways of Bournemouth and was the starting point of the long lasting Excelsior subsidiary based in Lymington (Hampshire Motorways).

In 1964, Skylark Motor Services of Woodfalls was purchased by A E Budden and Sons Ltd of West Tytherley. At that time, the Skylark business comprised a rented shed for the repair of 2 vehicles at any time and a fleet of other vehicles on a parking plot of approximately one acre (near where Skylark Motors is based today). Buddens had a proper garage built and Wilf Shergold stayed on as manager and then as director of the company now named Buddens Skylark Coaches Ltd.  Buddens transferred all repairs to Woodfalls but still parked some of the vehicles at their West Tytherley base.

With the Buddens acquisition of Skylark came the Salisbury Travel Agency at 21b Mitford Street with Mr Mel Moody being a director of Skylark and manager of the travel office. He became a director of Buddens Skylark  Coaches Ltd and subsequently the travel office in Salisbury was closed. Skylark had excursion licences from the New Forest area including Wellow, Landford, Nomansland, Woodfalls, Redlynch, Downton, Breamore and Woodgreen.

The Budden and Skylark businesses amalgamated in 1973 to become Buddens Skylark Coaches Ltd. The old Skylark depot at Woodfalls remained Budden's main workshop until April 1991. (Buddens were originally stage operators with a daily West Tytherley - Salisbury service which had started in 1926. They grew from their village origins to become a front line coaching business - with thirty vehicles in 1978 - and were associated with Len Wright Travel of London from 1976 until 1983). In 1991, the Buddens activies were concentrated on a new base in Abbey Park at Romsey, Hampshire with the name Buddens Coaches and no further reference to Skylark and under management of Peter Budden's son Simon. The former Woodfalls base was no longer used except as a petrol station and car repairs (under Shergold ownership) but did return to running buses for a while.

Skylark returned briefly to bus service operation following deregulation after the 1985 Transport Act with a short lived Tuesday and Saturday return journey to Salisbury over thier old route from Hale, Woodfalls, Redlynch and Downton. Then they were at various times contracted to Hampshire County Council for various local routes in the Fordingbridge area. In 1993, Skylark Motors separated from Buddens, having operated for the previous two years as a petrol station and repair and MOT centre for cars and light commercial vehicles. Having parted from the parent company Edward Budden took over and immediately began a local bus service as well as developing the garage and forecourt. 1994 saw Skylark purchasing its first band bus (a Scania Berkhof double decker). They continued to develop this side of the business and bought three more coaches before converting them to band buses also.  The last incursion into the bus business was in 1999 when a timetable leaflet issued in February showed two services i) Elmwood Avenue - Fordingbridge - Godshill - Downton - Salisbury (four journeys each way Monday to Saturday) and ii) Downton - Woodfalls - Godshill - Fordingbridge - Hyde - South Gorley - Ringwood Market (one return journey Wednesdays). Those services too had gone by 2002 although Skylark continued with their garage and motor engineers business in Woodfalls, whilst remaining successful in developing its band bus fleet. 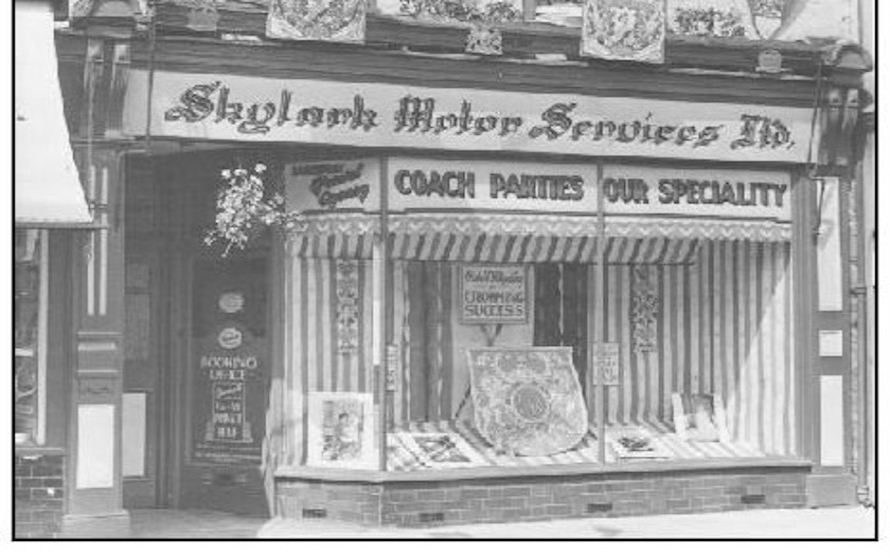 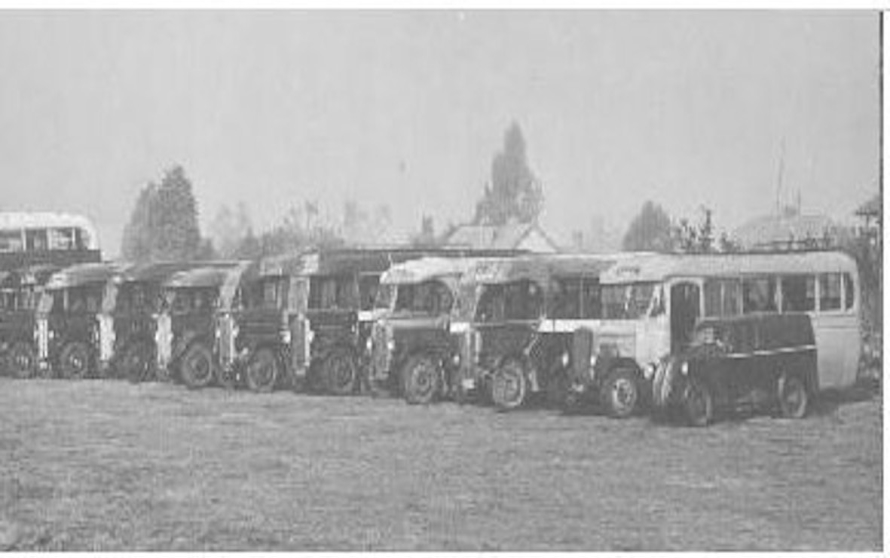 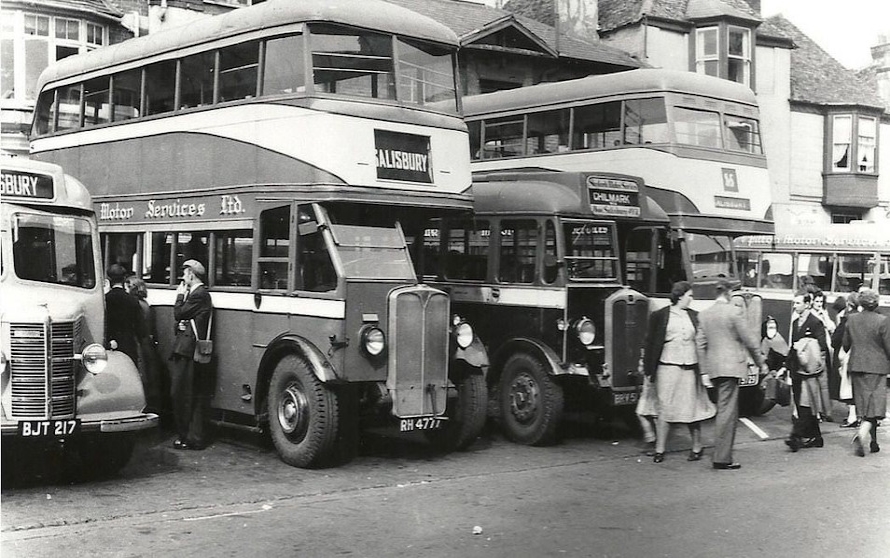 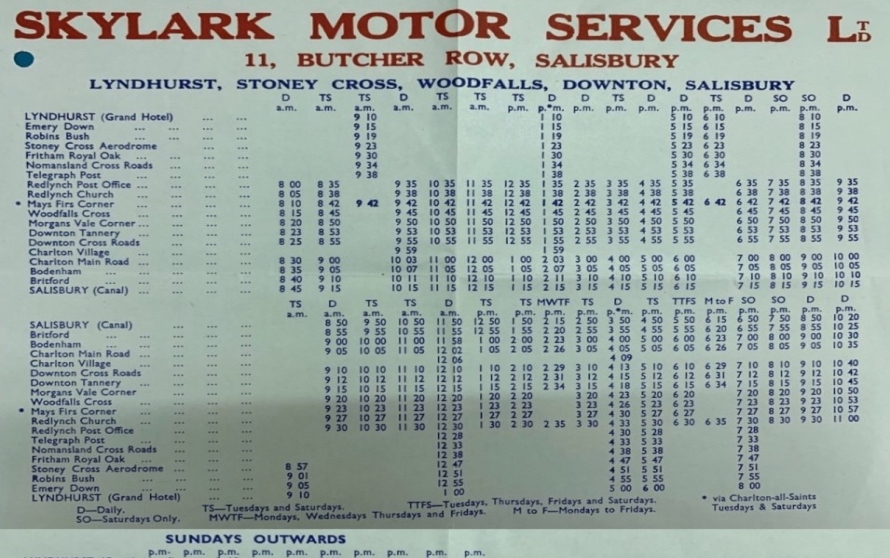