ATD mixes with the stars 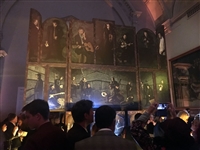 ATD's Managing Director, Brett Townsend, was a little star struck recently when he attended the unveiling of The Adoration Trilogy: In Search of Apollo at the Victoria and Albert Museum in London.  The work of art, a triptych featuring over 60 of the greatest men in rock music, was put together by photographer, Alistair Morrison, with support from Luzzo, ATD's sister company, who designed and built the physical structure.

Featuring legendary artists including Roger Daltrey, who masterminded this project with Alistair in aid of Teenage Cancer Trust and Teen Cancer America, the event was attended by many featured including Alice Cooper, Sir Tom Jones, Bill Wyman, Sir Ray Davies and Donovan to name but a few. The artwork took many hours to complete and involved Alistair photographing each musician in turn in various studios and settings, both here and in America.

To watch the interview with Alistair Morrison, please click here.